How successful businesses changed below the fold copy to drive conversions?

A few weeks back I wrote about the strategy followed by successful businesses to change their landing pages (above-the-fold) to increase conversions.

It took these businesses six months to a year to make that call as they took time to understand their visitors and attain product-market-fit.

I also wrote a post to describe the journey with timelines using Hypefury as an example.

These posts received an overwhelming response and became two of the 5 most popular posts of this blog as shown below.

These results inspired me to write this follow-up post where I'll describe how successful businesses changed below-the-fold copy+design to increase conversions.

For those who are new to this term, below-the-fold refers to the section of the web page that is only visible after scrolling down. (contrary to above-the-fold that's visible without scrolling when you visit a page)

Before getting into the case studies, I'd like to highlight 2 things that are of concern in the section immediately following the top section of a landing page.

To keep things simple I've used the same examples that I used in the earlier post. 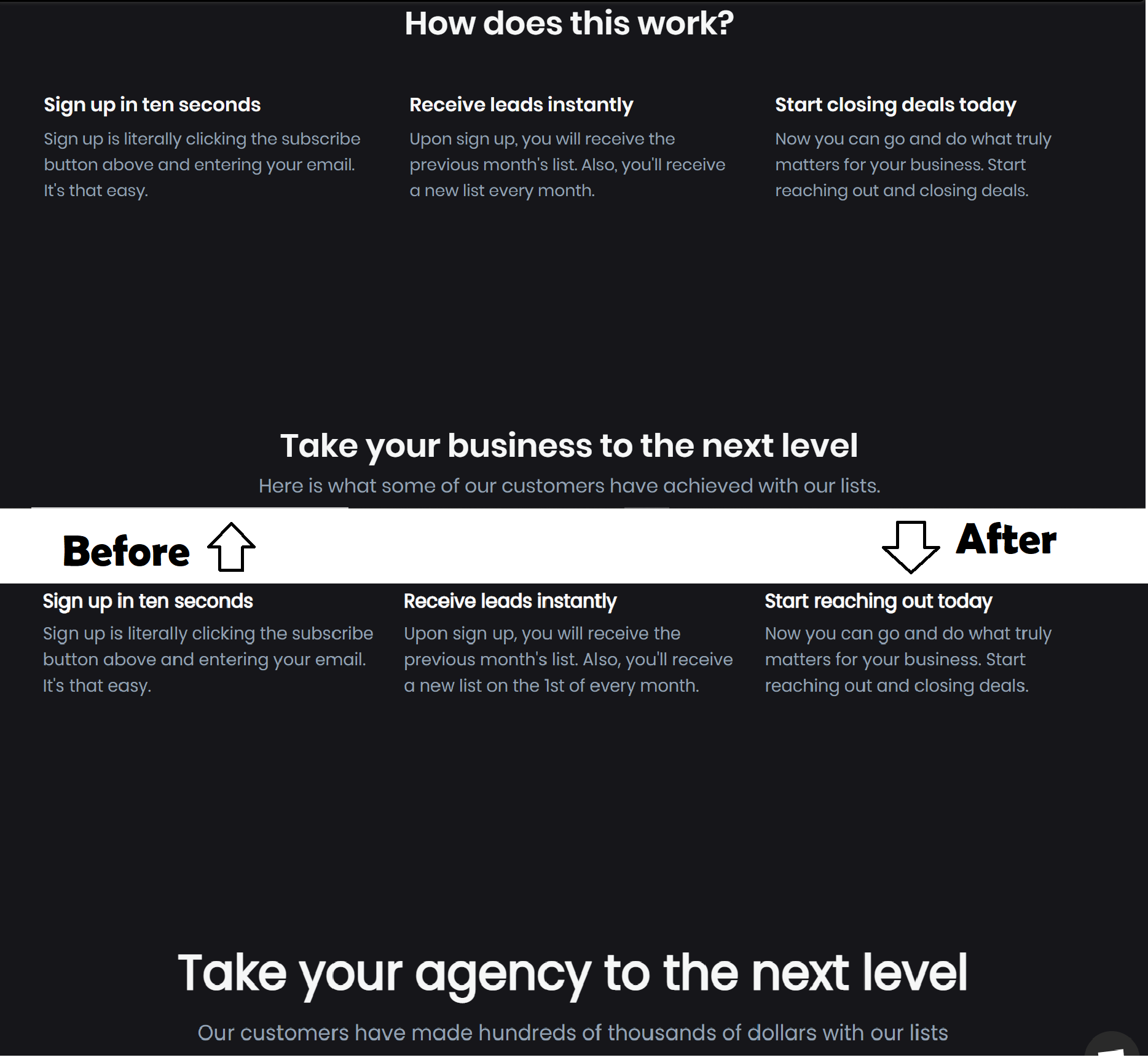 The changes that we notice in the second visual are:

1. The heading "How does this work" was removed- if we now compare the before and after sections, the new design prompts the user to take action. In hindsight, removing the "how does this work" heading looks like a smart move because

a> it wasn't adding any value

b> it was creating a break between the first section and the second. By removing "How does this work" heading, the 3 steps- "sign up in 10 seconds", "receive leads instantly" and "start reaching out today" are just a continuation of the earlier message. It prompts the user to take action and shows the immediate value of the subscription.

2. "Start closing deals today" was replaced by "Start reaching out today". The message is more precise and inspires action. Again, focusing on something that can be immediately actionable makes your message crisper and drives more conversion than stating a distant dream.

4. The introduction to testimonials is now very straightforward- it talks about $$. Earlier when it said "what some of our customers have achieved", it creates a sense of uncertainty in the mind of readers. It introduces friction.

By qualifying the message with the word 'some' makes an impression that the testimonials are from a few lucky people who got results with the service and it may not be reflective of the entire audience. The new message talks about dollars rather than "some customers" and focuses on results. 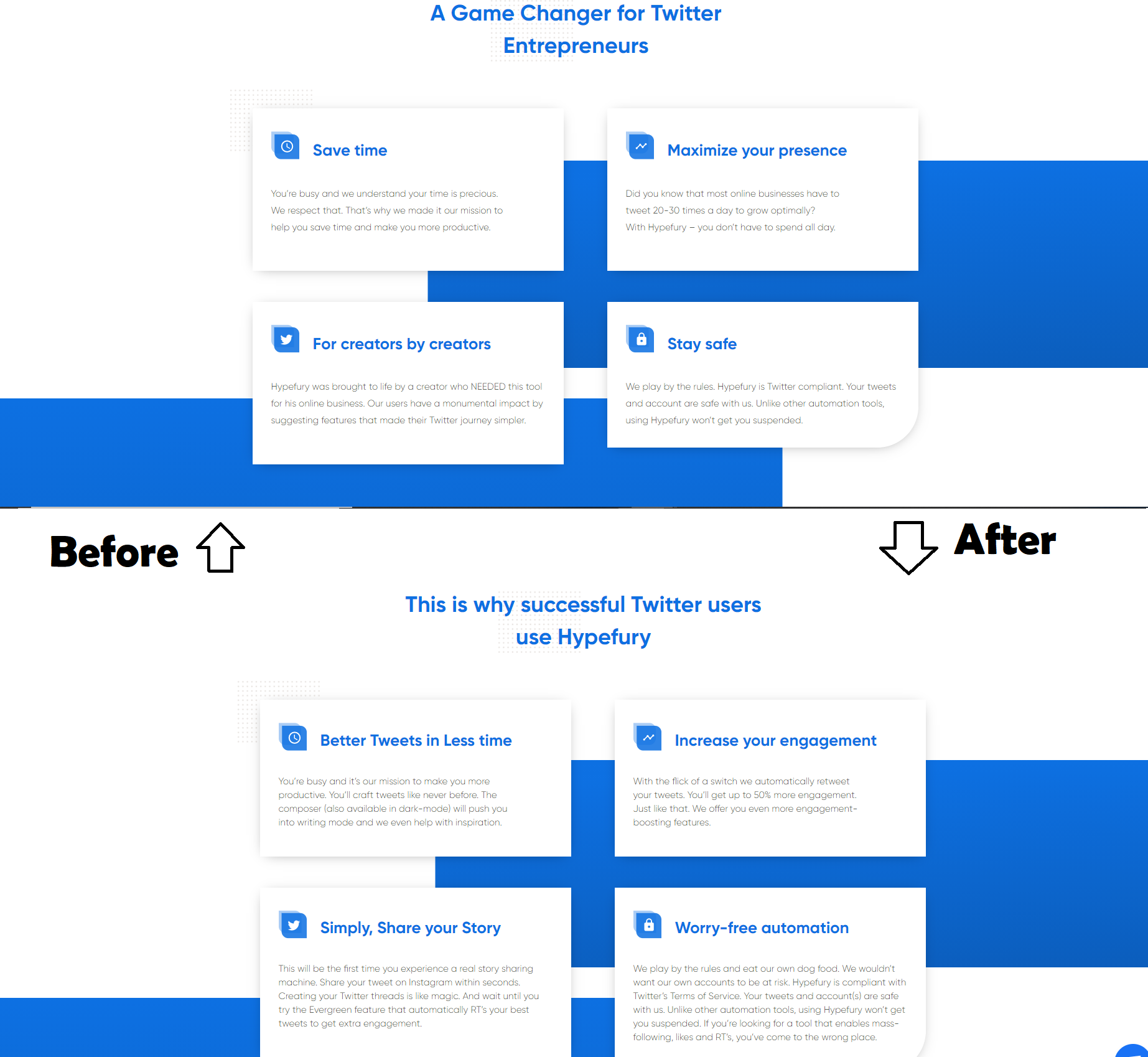 The key changes that we notice in Hypefury's new copy are:

1. Generic to specific- Over time as Hypefury found its product-market-fit, it tailored its copy from generic to specific. The problem with generic copy is that it doesn't help the readers make a decision. It doesn't tell them how your product is different. And most importantly why they should pay you or give you their precious time?

Now if you look at the before and after copy, it's clear that in the earlier copy there were many loose ends. "Save time", "Maximize your presence", "Stay safe" won't strengthen your message neither will it prompt the user to take any action because

b> when people are in the second section of your page (usually 80% of visitors drop-off in the first section) they expect something unique and/or intriguing.

If your product has multiple benefits, it's important to list them in a crisp manner without boring the readers. It often makes the job of copywriters very difficult because your readers have a limited attention span and you need to deliver multiple messages. (contrast it with the earlier example of Cyberlead where the message was crisp and the benefit was direct and immediate)

In the later design, Hypefury addressed most of those loose ends.

1. The heading was changed "Gamechanger for Twitter Entrepreneurs" to "Why Successful Twitter Users Use Hypefury" - calling a Twitter tool a gamechanger is a bit overreach. Speaking about the reasons why others use it makes more sense.

2. The benefits are well articulated- "Better tweets in less time" has a direct appeal for content creators who spend hours crafting their content. Low engagement and complex automation are other pain points that many creators have.

The Hypefury example gives us some ideas of handling the complex issue of communicating multiple benefits. However, it will require an entire post to explain the topic in its entirety.

I'm a product and conversion optimization professional and I love to share my knowledge and findings in this blog. If you have any questions, feel free to reach out to me on Twitter.